Babu is Jeannie's apprentice on Jeannie. Whenever he says, "Yapple dapple!", Babu's magic tends to go wrong in an unexpected way. Jeannie and Babu appeared together in one episode of The New Scooby-Doo Movies. Although both were intended as teammates of Scooby-Doo on Laff-a-Lympics, ownership issues with Jeannie led to Babu appearing alone. 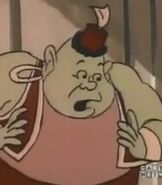 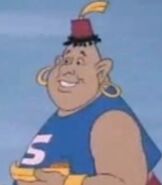 Add a photo to this gallery
Retrieved from "https://1701movies.fandom.com/wiki/Babu?oldid=5011"
Community content is available under CC-BY-SA unless otherwise noted.