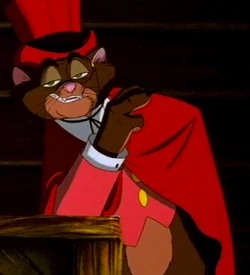 Cat R. Waul is the main antagonist in An American Tail: Fievel Goes West. Cat R. Waul's devious scheme seemed a long way to go just to feast upon a large number of mice. Waul is a businesscat, above such primitive and gruesome methods of collecting his food as chasing the mice down and eating them; 'an unnecessary expenditure of calories'. Instead, his plan was to travel to New York from Green River and convince the impoverished mice there to move west, insisting that out west cats and mice were friends. And he forced his gang to keep up the act by being nice to the mice, much to their dismay.

In essence, Waul is a well pampered and cultured house cat, with a mind for complex and evil schemes. It could be that his owner makes frequent trips to and from Green River and New York. His schemes tend to be somewhat cruder in Fievel's American Tails, where he often actually does resort to simply chasing the mice down and trying to eat them, and he is treated more like a generic villain in the series.