James Jonah "Jim" Cummings (born November 3, 1952) is an American voice actor and singer, who has appeared in almost 400 roles. He is known for voicing Darkwing Duck, Dr. Eggman from Sonic the Hedgehog, and Pete, as well as being the current voice of both Winnie the Pooh and Tigger, and the Tasmanian Devil. He has performed in numerous animated Disney and DreamWorks movies including Aladdin, Lion King, Balto, Antz, The Road to El Dorado, Shrek, and The Princess and the Frog. He has also provided voice-over work for video games, such as Icewind Dale, The Elder Scrolls V: Skyrim, Baldur's Gate, Mass Effect 2, Star Wars: The Old Republic, World of Warcraft: Mists of Pandaria, and Splatterhouse. 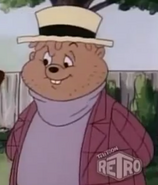 Aldrin Klordane (near the near the end of "Be Prepared") In The Spy King
Community content is available under CC-BY-SA unless otherwise noted.
Advertisement