Lady is the female protagonist in Walt Disney's 15th animated classic, Lady and the Tramp and a minor character in the less successful 2001 direct-to-video sequel (since her son Scamp took over as the star in the spotlight). She is the pet of Jim Dear, Darling, and Jim, Jr., Tramp's wife, Jock and Trusty's friend, Si and Am's arch-rival, and the mother of Annette, Danielle, Collette, and Scamp. In the franchise, she was voiced by the late Barbara Luddy in the original film and later Jodi Benson (who also voiced Ariel in The Little Mermaid franchise) in the sequel. 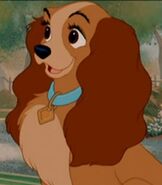 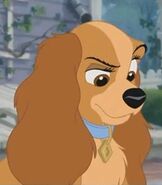