Lucien Dodge (born June 24, 1984) is an American voice actor who does work in animation, anime and video games. He has been heard in commercials endorsing products such as Pop Tarts, Minute Maid, Verizon Wireless, Kellogg's and Chevrolet. He is mostly known for his characters in anime such as Waver Velvet in Fate/Zero, Maron and Chilli in Pokémon, Takumu Mayuzumi in Accel World, and the title character of the video game Dust: An Elysian Tail. He has also read for audio books for Live Oak Media. Dodge has appeared on voice acting panels at T-Mode, Otakon, and NohCon, has been a special guest teacher at NYU, and had appeared at the National Audio Theater Festival for six consecutive years. He currently lives in Los Angeles, California. 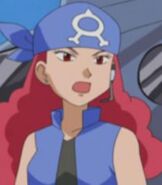