Queen Beryl (クイン・ベリル Kuin Beriru), named after the mineral beryl, is the first main antagonist in the Sailor Moon series. Beryl has immense magical power, but she uses most of it to channel the life energy harvested by her servants to the entity called Queen Metaria. In most versions of the story, she has the ability to corrupt others into serving the powers of darkness. Her generals, for instance, were once the bodyguards and best friends of Prince Endymion, and in most versions of the story she is able to use her powers to sway Tuxedo Mask into her service.

She played Aunt Pristine Figg in Scooby and Pikachu the Movie 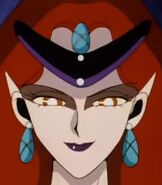 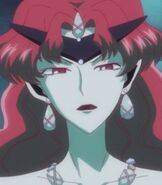