Scott Eric Weinger (born October 5, 1975) is an American actor, writer and producer, best known as the voice of the title character in Disney's Aladdin. Weinger would reprise the role in two direct-to-video sequels, a Disney Channel television series, and the Kingdom Hearts series. He is also well known for playing D.J. Tanner's boyfriend "Steve Hale" on Full House for fifty episodes spanning four seasons. He is currently a writer and producer for television, most recently for Galavant and Black-ish, both on the ABC Television Network. 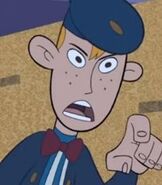