Tara Platt (born June 18, 1978) is an American actress and producer who has provided voices for dozens of English-language versions of Japanese anime films, television series, and video games. Her notable roles in anime include Temari in Naruto and Reina in Rave Master. In video games, she has voiced Noir in Tales of the Abyss and Mitsuru Kirijo in Persona 3, as well as characters in Mortal Kombat vs. DC Universe, Marvel vs. Capcom 3, Saints Row: The Third, Soulcalibur IV, and League of Legends. On screen she has appeared in television shows like Scandal, Hawaii Five-0, Castle and Revenge, as well as the feature film The Call. She has a production company Monkey Kingdom Productions with her husband, Yuri Lowenthal, where they have produced several films that have made the film festival rounds, and a live-action web series called Shelf Life. They authored the book Voice-Over Voice Actor which gives career tips. 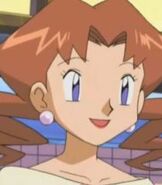