Tracey Hoyt is a Canadian voice actress and alumna of York University and the Second City National Touring Company (Toronto), possessing a Bachelor of Fine Arts in Theater Performance. She played the first North American voice of Rini in the Sailor Moon R series and the three Sailor Moon movies. Hoyt played the voice of Me Bear in 2005's The Care Bears' Big Wish Movie. Currently, she appears as Ms. Deeds in Delilah & Julius (Family Channel Canada) and as Guinivere in Bob and Margaret. (YTV Canada). Tracey is a double Gemini nominee for her work on CBC TV's comedy series The Tournament. She has voiced hundreds of radio and TV commercials. She was born in Chatham-Kent, Ontario. 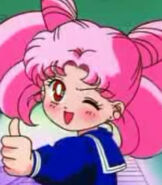